Thank you and goodbye

On July 10 2011, in the wake of reports that its journalists had hacked  messages from the phone of a dead child, the News of the World published its 8,674th and last edition.

It called itself “The world’s greatest newspaper”. Others called it “The paper that died of shame”.

Beneath the hyperbole lay a simple economic truth. The first line of copy in Edition No. 1 of the News of the World, dated Sunday October 1 1843, read:

“THE CHEAPEST AND BEST MODE OF ADVERTISING”

News International’s problem now, though, was that advertisers wouldn’t touch it with a surgical glove. And so James Murdoch pulled the plug. The paper was history.

But what had happened to the News of the World Find Madeleine Reward Fund? 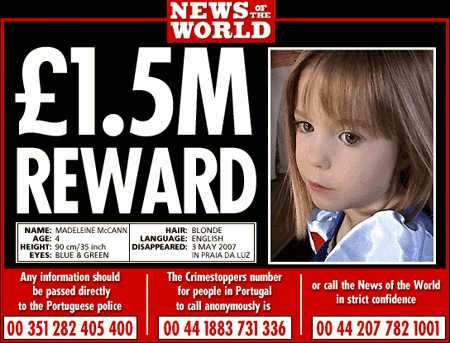 The paper had splashed its £1.5m headline reward figure alongside a picture of Madeleine and three phone numbers to call with information.

(One of these was its own news desk, which you could call “in strict confidence”. Whether this meant that the newspaper would fail to share your information with the police is unclear.)

The paper had also invited readers to add their money - cash donations - to the headline pledges from the paper and its contingent of celebrities. It had set up a bank account , No. 52135590, Sort Code 40-36-15, at HSBC in Cathedral Square, Peterborough, just down the road from News International’s accounts department.

Over the months that followed, for some reason,  it never told its readers how much it had collected.

In its final edition, although Madeleine’s name and picture had often appeared on its front page, her story wasn’t one of those it splashed across its 48-page Souvenir Pullout. But beneath a copy of a front page from December 15 2010 (WORLD EXCLUSIVE | CAUGHT BY THE BAILS. HURLEY CHEATS.. WITH SHANE) it had marked the key events of 2007:

THREE-YEAR-OLD Madeleine McCann is reported missing in Portugal by her parents Kate and Gerry. Gordon Brown replaces Tony Blair as leader of the Labour Party and Prime Minister.


That was it. The last chance to tell the readers was gone. Who would now know?

Early in December 2013, Gerry McCann was contacted by email at the University of Hospital of Leicester, where he is a Consultant Cardiologist.

He was asked what had happened to the Reward Fund. His reply, within the hour, was courteous and clear:

That is something you will need to take up with News International.

My understanding is that the reward was made up of pledges.


Ten weeks after the company had shut down the News of the World, a Press Officer was asked by email:

1. Is (the Reward Fund) still active?

2. How much was raised and what has happened to the funds since?

3. Given the demise of the newspaper, who is now responsible for the administration of this account?

4. What are the current plans for the Fund?

The reply, six days later, was also courteous and clear:

Thank you for your enquiry.

I can confirm that the funds raised by the appeal were donated in April this year (2011) to the official Madeleine Fund and the fund created by News of the World is no longer active.