Putting the ‘press’ in suppress 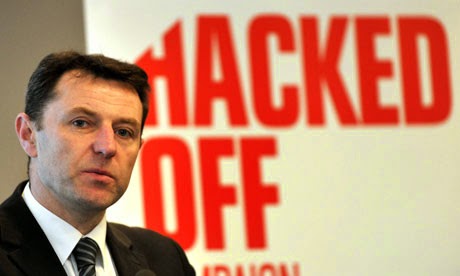 On March 4th 2012, Hacked Off, in its campaign for a free and accountable press,  reviewed on its blog the events of the previous week at the Leveson Inquiry.

The Inquiry had begun Module 2, examining the relationship between the police and the press.

One witness was the Guardian’s Nick Davies, whose revelations over the hacking of Millie Dowler’s phone had led to the demise of the News of the World.

In his evidence he had said:

..material provided from press officers can be inaccurate and “out of step” with the needs of the public, as they are employed to protect the interests of the organisation.

Kate and Gerry McCann are, alongside Chris Jefferies and the Dowler family, very much poster-children for Hacked Off. They are regular headline signators of the group’s campaigning activities.

So it would be interesting to know what they make of the activities of News International’s press office in protecting the interests of the organisation with which they had previously had such a damaging relationship, according to their evidence at the Leveson Inquiry.

On 28 September 2011, a News International press officer had revealed that,  in April 2011,  the News of the World had paid out cash collected by readers as a reward for information leading to the safe return of Madeleine McCann, despite the fact the child was still missing. It had transferred the money to the limited company set up by Kate and Gerry McCann, but hadn’t told its readers.

It had also failed to tell the charities to which it had said it would donate the money if the reward hadn’t been claimed.

I can confirm that the funds raised by the appeal were donated in April this year (2011) to the official Madeleine Fund and the fund created by News of the World is no longer active.

There was one obvious question which needed to be put News International. How much had been raised by its readers?, it was asked on 29 September 2011.

A couple of days later, the press officer replied:

I am checking with colleagues if we can release that information.

Several weeks passed without reply. The press office was during this period busy with the fallout from the hacking scandal. But perhaps parent company News Corporation could help.

Genie Gevenchak, Chief Compliance and Ethics Officer of News Corporation, based in New York, was approached on 26 October 2011.

The first of nine questions put to Ms Gevenchak was:

How much did News of the World readers contribute to the paper's 'Madeleine Fund' reward appeal?

Ms Gevenchak’s ethics apparently precluded her from replying directly, but it did prompt a reply on 1 November 2011 from the News International press officer in London:

I’m afraid that we didn’t disclose the amount raised by the fund in the paper and nor am I able to explain why those funds were paid out to the charity in April 2011 given that those staff involved in the decision have now left the business following the closure of the News of the World.
I’m sorry that we are not able to help with more detail.
And that, it seemed, was the end of that.

Except the Leveson Inquiry proved, if not a practical tool for developing a sensible mechanism for curbing the wilder excesses of the press, at least a fountain of information.

After Susan Panuccio, then Chief Financial Officer of NI Group, had appeared before Lord Justice Leveson to explain her role at the organisation, she too was asked, on 18 January 2012, how much News of the World readers had donated.

A week later she replied:

I have asked (News International’s press officer) to respond on my behalf.

As you know, we didn’t disclose the amount raised by the fund in the paper nor do we have any obligation to do so. We can confirm that the funds raised by the appeal were donated in April last year to the official Madeleine Fund and that the fund created by News of the World is no longer active.
I’m sorry that we are not able to help with more detail.

And that, it seemed again, was the end of that.

But maybe Nick Davies had been right. Maybe it was just the press officer that was the problem.

In May 2012, the Guardian reported on the appointment of Guto Harri, formerly Boris Johnson’s director of external affairs, as head of News International’s head of communications.

In the report, Harri was quoted as saying:

I would not be joining this company myself if I thought that they condoned, and were actively involved in, any of the practices that they have rightly been condemned for and I cannot think that the people I have met and the man I will be reporting to (Chief Executive, Tom Mockridge) is I think without doubt the person most determined to clean up any lingering odour of bad practices.

Harri was clearly the man to take questions head on. On 1 August 2012, he was asked:

.. in the light of the new era of openness and transparency at News International and your appointment.. Can you please tell me how much money News of the World readers contributed towards the newspaper's Madeleine Fund, account number 52135590?

But the News International press officer – yes, that one – did:

Guto passed your message to me. As you know, we didn’t disclose the amount raised by the fund in the paper.

You could try asking the charity and see if they would like to give you more detail.

I’m sorry that we are not able to help.

(Madeleine’s Fund: No Stone Unturned Ltd, of course, is not a charity. It is a limited company.)

News International, though,  appeared to be serious about introducing a new culture. It made a new hiring, a Chief Compliance Officer, said by the Guardian to be part of Rupert Murdoch’s broad internal anti-corruption review.

To continue to be worthy of the trust of our audiences around the world, we all have an affirmative obligation to adhere to the highest standards of ethical behaviour, consistent with our standards of business conduct.

Fair enough. Could the new Chief Compliance Officer help? How much did NotW readers donate to NI's  bank account number 52135590?, an email asked.

I apologise for the delay in getting back to you.

I am currently in the process of investigating this matter more fully, and hope to be able to respond to you substantively as soon as I am in a position to do so.

Which was excellent news.

I am still investigating this, but will respond to you substantively as soon as I am in a position to do so.

This seemed like an awfully long time to check a bank statement.

By the beginning of December 2011, nothing more had emerged from News International and it had been fifteen months since the press office had been asked what had happened to News of the World Reward Fund.

For some reason, News International was having real difficulty revealing how much money it had taken from the public and given to the McCanns’ Fund.

So the company was asked, once again, how much did the public donate to the News of the World Madeleine Reward Fund in 2007?

This time, the reply came within twenty-four hours. It stated:

In answer to your question, a total of £21,257.32 was received and banked in The Madeline (sic) Fund HSBC Bank Account No 52135590 between May 2007 and November 2007.  No other payments save those relating to this particular appeal were received from readers into this account.

In April, 2011, after a considerable length of time had passed and taking into account the circumstances of the McCann family, it was agreed by senior executives at the News of the World that the £21,257.32 should be paid to Madeline's (sic) Fund: Leaving No Stone Unturned. This fund is a not-for-profit company which was established to find Madeline (sic) McCann, support her family and bring her abductors to justice.
See http://www.findmadeleine.com/about_us/madeleines-fund.html for more details about this fund, the directors of the company as well as its objectives.

News International recognises that, in transferring the payments collected in 2007 to the Madeline's (sic) Fund: Leaving No Stone Unturned in April 2011, the News of the World may not have strictly complied with the terms under which that money was collected from its readers. The article dated 13 May, 2007 stated under the heading 'How you can add to the reward': 'Should the reward remain unpaid for any reason, the portion made up of readers' donations will be shared equally by children's charities Barnado's, Childline and the NSPCC.'  It was decided, entirely in good faith, that it would be more appropriate, given the circumstances of the McCann family, that the money be transferred to Madeline's Fund: Leaving No Stone Unturned, as opposed to splitting the donations between the three charities.

We would like to thank you for bringing this matter to our attention.  We are in the process of notifying the three charities of the findings of our investigation into this matter, but feel, on balance, that the decision taken to pass the money collected to Madeline's (sic) Fund: Leaving No Stone Unturned was the right one, both ethically and morally, taking into account the difficulties and sensitivities surrounding this tragic matter.

The answer, after 15 months of questions,  simply raised more questions, as we shall see.

But at least someone at News International seemed to disagree with the press officer’s notion that, when asked to reveal how much money the public had donated to a fund set up by one of their newspapers, they had no obligation to do so.

Perhaps, as Nick Davies had suggested, the press officers were truly “out of step” with the public.