An open letter to David Dinsmore

Ben wrote: <British trolls are helping pay legal bills of an ex-cop who said Madeleine McCann's parents were behind her disappearance.>

Then, you’d know all about trolling, working for News Corporation.

I see you’ve been there 24 years. It must be hard to have a real-world perspective, when you’ve spent so long inside what has been described as a corrupt and criminal corporation.

Your sister newspaper, the News of the World, was forced to close – it “died of shame” – after a culture of hacking was exposed, one that your company covered up and denied for years.

That same newspaper even trolled Kate McCann, printing extracts from her diary under the pretence it had permission, then bunging her £125k compensation when the McCanns called in the lawyers.

Your own newspaper, The Sun, published on its website ‘exclusive’ footage of a cadaver dog searching the McCanns’ rental car and apartment 5a, marking the ‘scent of death’.

(The footage is still here on YouTube: https://www.youtube.com/watch?v=8lrrMoUr3OA, with your paper’s logo attached)

David, that’s evidence that may or may not be used in a future trial. And your predecessor published it on the internet.

Sun journalists have admitted in court to paying policemen and public officials for tittle-tattle about Royals, politicians or celebs. Most of them claimed they didn’t know it was illegal.

(What do they teach you NewsCorp guys about journalistic ethics?)

In your own tenure, in October 2013, you thought it fit to print a souvenir Maddie pullout, which was offered as ‘an exclusive e-book ONLY for Sun+ members. If you’re not already a member, join now.’

You trolled a missing kid, the same way the News of the World hacked a dead girl’s phone, to try to squeeze an extra few quid into Rupert Murdoch’s bank account.

You hired and condone the writings of Katie Hopkins. You signed off her piece which described refugees, dying in the Mediterranean, as “feral humans” and “cockroaches”.

Every time you print a picture of a bare-breasted woman on page 3, for no other reason than to show off her tits, you troll other women.

(C’mon David, how old are you? Thirteen?)

And here we are, supporting a man who we believe has been unfairly traduced by the McCanns, with lawyers paid for by money from the Fund set up to find Madeleine.

And you call us trolls.

David, you know as well as I do, that, if at any time in the future, the Met give any indication that the McCanns have anything to do with the disappearance of their daughter, your paper will flip, without hesitation, into destroying the couple.

You will have absolutely no compunction in doing that, simply to sell another paper or drive another visit to your website.

When you do, we’ll be watching. And we’ll remind you all about trolling.

PS Thanks for the free advertising.

To contribute to Gonçalo Amaral's defence fund, go to http://www.gofundme.com/legal-defencepjga
Posted by Unknown at 04:09 No comments: Private detectives working for Kate and Gerry McCann reported that the front door of the holiday apartment where Madeleine disappeared was left unlocked and the key had been left in the apartment.

The claim was made in a report prepared in May 2007 by Ken Farrow, then Director of Investigation Services at security company Control Risks.

Farrow, along with Joint Director Michael Keenan, was sent to Praia da Luz on 13th May 2007 to conduct comprehensive interviews with Mr and Mrs McCann and members of their holiday group.

The report describes the two entry points to holiday apartment G5a at the Ocean Club.

At the back, facing the pool, were double-glazed sliding windows, with one central locking point, an ‘Open’ or ‘Closed’ button on the handle.

According to the investigators, the McCanns had left this terrace door unlocked when they left for dinner at the tapas bar around 8.30pm in order to provide easy access when they periodically checked on their three children.

At the front of the apartment, Farrow states that there was a heavy wooden door fitted with a double-locking mortise lock.

He goes on to report that, on the night of May 3, the front door was not locked and the key was left on the shelf dividing the kitchen and living room of the apartment.

(The shelf is pictured above, centre-right in a photograph made by Portuguese police.)

The investigators admitted that they had no access to the crime scene or to any other information collected by the Portuguese authorities or by Leicestershire Police.

Farrow’s report was not included within the Portuguese police case files released to the public in August 2008.
Posted by Unknown at 01:25 No comments:

The gift that keeps on giving

According to the newly-released accounts for Madeleine's Fund for year ending March 2014,  the Fund received another £400,000, 'donated' in connection with Kate McCann's book.

The accounts do not give any information regarding the source of this 'donation', but it is accounted for under Restricted Funds, in a similar manner to the £550,000 'donated' by News International in 2011 for newspaper serialisation rights of the book.

The 'donor' has placed restrictions on how the money may be spent.

Who knows, perhaps the book is destined for the silver screen.

But it's already proved worth its weight in gold.
Posted by Unknown at 03:57 No comments:


On the evening of Saturday 4 October 2014, the Mirror posted to its website an article by star columnist Carole Malone.

'Madeleine McCann internet trolls are devoid of humanity – much like the people who abducted her.'

In it, she wrote about Brenda Leyland who, unbeknown to Malone, had earlier that day been found dead, alone, in a hotel room after being stalked on global tv by SkyNews and then named by the Daily Mail and others.

She looks like a perfectly respectable woman. But of course she isn’t.

She’s a cowardly bully who hides behind her smart front door and spews her bile in secret because she doesn’t have the guts to do it in public.

She thinks she’s entitled to threaten, hound and bully the innocent. Is that because her own life is so lonely, so miserable, so poisoned that she wants others to suffer the same? Or is she just a twisted, fecked-up bitch who gets her kicks from hurting people?

Brenda’s ‘crime’ – it’s unlikely the CPS will pass an opinion on that now she’s dead - had been to post her views on the McCanns in a little-visited outpost of twitter called #mccann.

Malone’s own opinions were written, of course, for a national newspaper and its website.

See if you can identify who wrote the following. Was it:

1. Eating a Mars bar when you're dieting is a mistake. Leaving three little kids alone in an unlocked apartment while you go eating and drinking with your mates is irresponsible.

2. (The McCanns) never seem to miss an opportunity to court publicity when they need to raise money.

3. Is Gerry McCann right to take money from newspapers he claims have caused his family distress?

5. Three kids under the age of four alone in an apartment is a disaster waiting to happen-however you cut it. They could have set themselves alight.

6. Had she actually acted a bit more maternal she would never have left her three kids alone in an unlocked room while she went out to have dinner.

7. God forgive me for thinking this, but there have been times this week when I've been angered by Kate and Gerry McCann.

8. I've been watching the two of them jogging on the beach and thinking: "What the hell are they doing."

9. Yes, the police have made stupid mistakes. But then so did Kate and Gerry by leaving their children alone in an unlocked apartment for five nights in a row while they went out eating and drinking with friends.

10. If these people have nothing to hide, if they really DO want to help find Maddie, why haven't they already hauled their backsides back to Portugal?

How did you get on?

Every single quote, of course, was taken from columns by Carole Malone in the News of the World and Sunday Mirror in 2007 and 2008.

But in the middle of this mass of outraged ranting, Malone has something important to say.

In the News of the World on 4 May 2008, in an article titled ‘I wept for Kate but still blame her', she wrote:

We can't NOT say what we think when the McCanns continue to ask for publicity and money to help find their little girl. They got us involved and they have to accept that we might have an opinion about what they did.

Information wants to be free

... as @winnower1 sensibly pointed out earlier today on twitter.

It's hard to disagree with that sentiment when applied to information received as a result of a Freedom of Information Act request.

Readers will note no difference between the information recorded in the previous blogpost from the redacted document seen by this blog and the images now posted here. 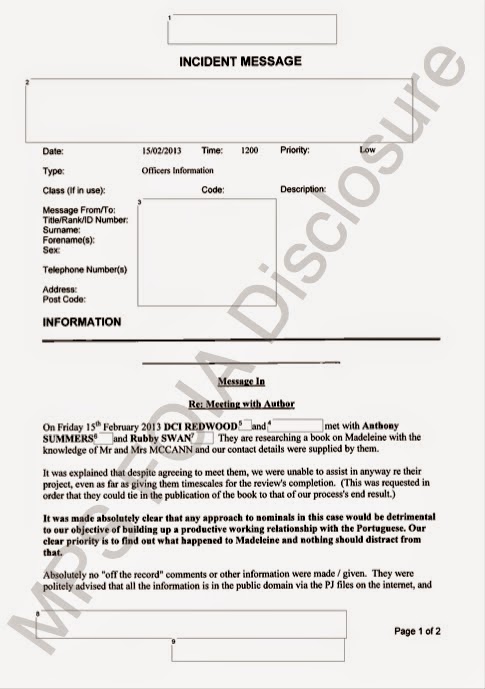 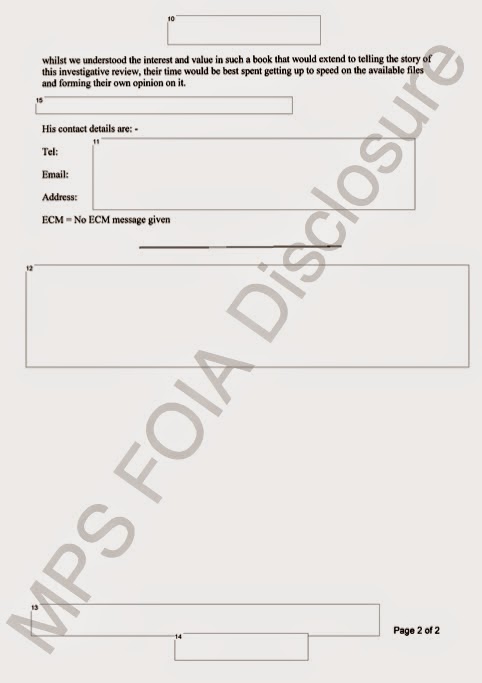 
At Scotland Yard, Detective Chief Inspector Andy Redwood met with us at the outset, spoke frankly, but made it clear that he and his colleagues could not favour us – or any part of the media community – over any other parties.

According to a Metropolitan Police document seen by this blog, DCI Andy Redwood and another unnamed MPS Detective Inspector met with Anthony Summers and Rubby (sic) Swan at 1200 on Friday 15th February 2013.

The Incident Message notes that the authors:

".. are researching a book on Madeleine with the knowledge of Mr and Mrs MCCANN and our contact details were supplied by them."

The message states, in bold type:

"It was made absolutely clear that any approach to nominals in this case would be detrimental to our objective of building up a productive working relationship with the Portuguese. Our clear priority is to find out what happened to Madeleine and nothing should distract from that."

It goes on to say:

"Absolutely no “off the record” comments or other information were made/given. They were politely advised that all the information is in the public domain via the PJ files on the internet, and whilst we understood the interest and value in such a book that would extend to telling the story of this investigative review, their time would be best spent getting up to speed on the available files and forming their own opinion on it."

The internal message, for Officers Information and classified as Low Priority, was revealed under the Freedom of Information Act.

"It was explained that despite agreeing to meet them, we were unable to assist in anyway re their project, even as far as giving them timescale’s for the review’s completion. (This was requested in order that they could tie in the publication of the book to that of our process’s end result.)"

"The authors wish to make clear at the outset that, after more than two years studying this controversial case, they have seen not a shred of evidence to indicate that Gerry and Kate McCann, any member of their holiday group, or Robert Murat were at any stage – in May 2007 or subsequently – guilty of malfeasance of any kind in connection with Madeleine McCann’s disappearance or the repercussions that followed."

Three years and three months after they launched their review, now a fully-fledged investigation,  a 37 strong team of Met officers have yet to draw their own final conclusion.

The Met, it seems,  were unable to fall in line with the publisher’s marketing plans.


Can it be that Summers and Swan’s book , described as ‘the definitive account of the Madeleine McCann case’,  came rather too soon?