Gone. But not forgotten.

Findmadeleine.com bills itself as ‘The official site to find Madeleine McCann’.

Whether the website achieves its aim before the combined forces of the Metropolitan Police and the Polícia Judiciária remains to be seen.

But it doesn’t seem capable of looking after even itself.  Some of its pages have gone missing.

But until the end of June this year, you could have found another 17 or so entries. Those messages, posted
between 14 January 2010 and Christmas 2012, have simply disappeared from the site.

It may, of course, be a simple glitch that will soon be resolved. Alternatively, it may have been a deliberate
removal of information that may have proved difficult or embarrassing, in retrospect, to explain.

Unlike in the real world, nothing really disappears from the internet. Sites like gerrymccannsblogs.co.uk and
mccannfiles.com are dedicated to preserving information related to the disappearance of Madeleine.

And, especially for the avoidance of doubt, the Wayback Machine (archive.org.web) is an invaluable tool,
capturing as it does the content of websites at particular points in time.

Here is a snapshot from findmadeleine.com taken by the Wayback Machine on 4 May 2011: 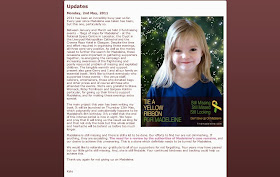 Here, Kate McCann explains what “an incredibly busy year so far” 2011 had been.

She explains how there had been three fundraising events between January and March. She mentions the money raised - though not how much - and thanks everybody who supported these events.

She writes about the launch of her book on 8 May 2011 , which “poignantly and coincidentally happens to be Madeleine’s 8 th birthday”.

She reiterates her gratitude to supporters “for not forgetting”.

But what she forgets to do is mention anything about the News of the World Reward Fund.

Which seems odd, because in the weeks preceding this update, in April 2011, the News of the World had quietly handed over to Madeleine’s Fund some £21,000 that had been donated by readers in 2007 towards a reward for information leading to the safe return of Madeleine.

Why did Kate McCann not take this opportunity to thank those very readers?

Why, along with the News of the World and News International, did she not want anyone to know about the payment?

Why do the McCanns and their fellow directors of Leaving No Stone Unturned Ltd continue to refuse to acknowledge accepting this money?

Did those readers’ donations simply disappear, like lost webpages,  into payments for lawyers, accountants and
PR men?

Does it look a little greedy, taking £21,000 that should rightly have gone to three children's charities, at precisely the same time the Fund was about to receive another 'donation' of £550,000 from News International for serialisation rights to Mrs McCann's book?

Is that what’s so embarrassing?

Or is it the acknowledgement that cashing in the reward money makes it look like you know your daughter isn’t coming back?